The Center for Media Ranko Munitić opened on April 3, 2012, that is on Ranko’s birthday, in a space in which he lived and worked, a loft which Ranko and Zorica built in the early 1980’s and moved into it in May 1984. This big apartment in Belgrade’s Slavija soon became a haunt of artists and culture pundits in all the media. The Center’s goal is to continue as such.

For the purpose of researching Ranko’s oeuvre and other activities in the fields of film, strip, animation, television, performing, visual and applied arts, the Center has a large room with around twenty seats, a big table that Ranko made himself together with the benches, at which he used to write, and a plasma TV-set for DVD projections.

In the middle of the room is a logo containing Ranko’s self-portrait drawing and autograph and the name of the Center. Hanging on the walls are enlarged photograph’s of Ranko and a collage of photographs from Ranko’s childhood years spent in Trogir, with a letter he wrote to his father from Zagreb when he was eight, which is also part of the collage. There is also a photograph from Ranko’s childhood in Zagreb, showing him playing with his maternal and paternal cousins before leaving for Trogir for the summer break, and a photograph of his paternal uncle and grandmother. 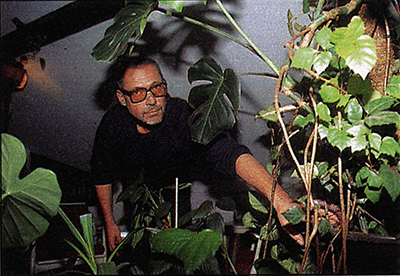 The “Winter Garden,” as Ranko used to call this room, which is now also part of the Center, contains the plants Ranko took care of, several framed transparencies showing scenes from Zagreb Film cartoons„ and drawings by Petrićić, Aleksejev, Dragić, Kavandoli. At the disposal of the Center users is also the terrace situated in front of the “Winter Garden.”

Another room, the study, houses Ranko’s book and video libraries. Their inventory will be at the disposal of the researchers of Ranko Munitić’s oeuvre.